Malcolm Turnbull on how startups and governments can work together

The former Australian Prime Minister tells Freelancer why startups need to be vocal in their dialogue with government
Dec 9, 2019 • 3 minute read 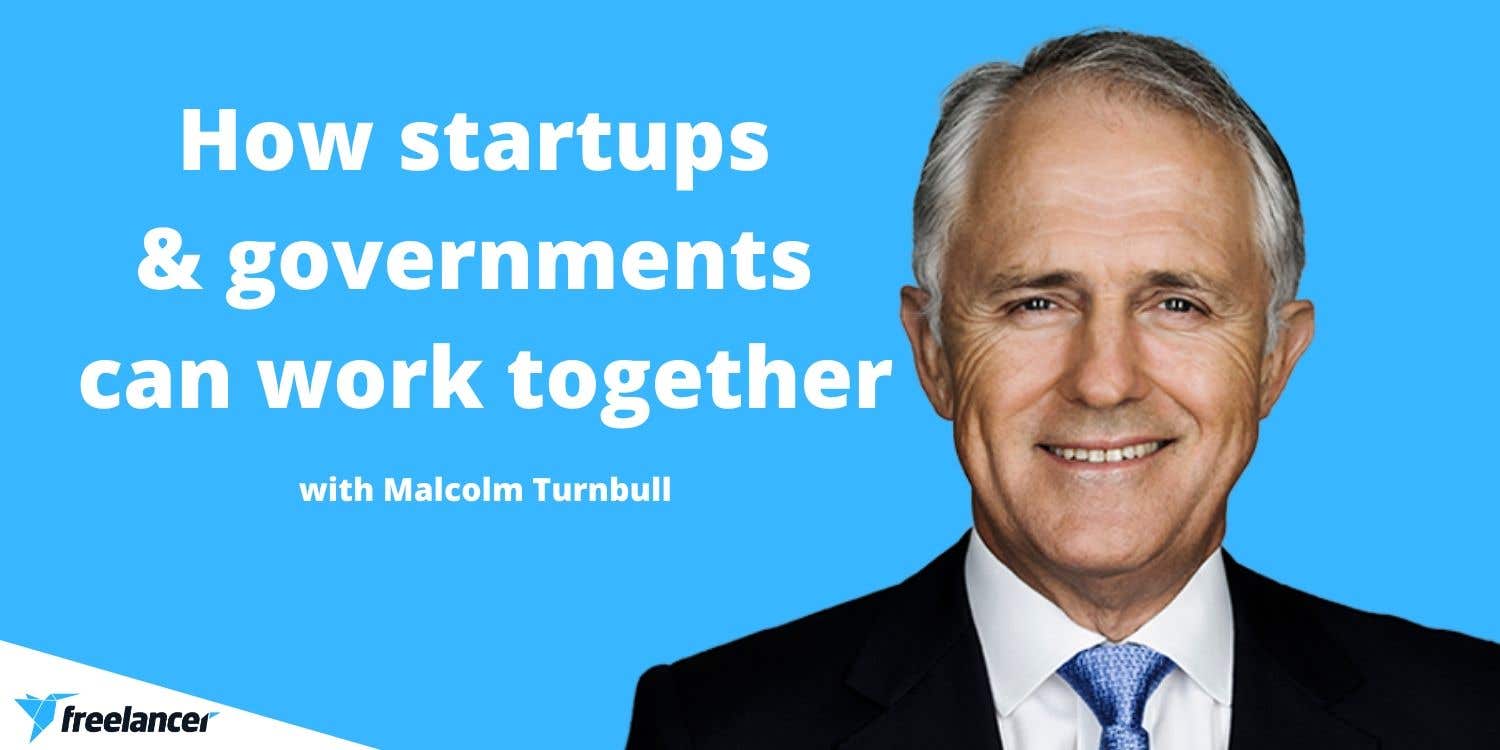 Former Australian Prime Minister Malcolm Turnbull sat down at StartCon 2019 with Freelancer.com's Adam Smith to talk about the environment for startups, the dialogue innovators need to have with governments and why now is a great time to be an entrepreneur.

Adam Smith: Something really interesting I thought you said on stage is the idea that governments a lot of times sort of think that they’re dictating policy and it’s trickling down to everyone else, but really a lot of times they’re almost playing catch-up with the market. Where do you think governments — not just in Australia, but around the world — are playing catch-up to where innovation and startup culture is now?

Malcolm Turnbull: Well, governments will always be playing catch-up, because the market is moving so quickly. If the public servants and the government were able to anticipate where the market will be in five years, they’d be geniuses, which they’re not. But the point is, if you’re going to be playing catch-up, you want to catch up very quickly. You’ve basically got to be moving in real time, so I think, don’t criticize governments for not having a crystal ball, but equally, industry has got to be able to say to governments, ‘Look, the policy settings we had a few years ago were fine, they were working. The world has changed. We need to make some changes too.’ That needs to be a regular and constant dialogue.

AS: In an environment where some of these companies are so global and working across so many markets, how does government respond to something like that? How does it react to a monolithic company like Facebook or Uber?

MT: There’s no substitute for engagement and discussion. It just takes time and attention, that’s all.

AS: Do you think that right now, the current environment we’re in, is a good environment for startups in Australia?

AS: What kind of roadblocks do you think need to be removed to get to that?

MT: You and your community at Freelancer would be better able to identify them than me. At this stage, you’ve got a very dynamic innovation ecosystem, you’ve got good support in terms of tax relief for early stage investment, you’ve got funds and a lot of venture capital for startups and early stage — and, indeed, later stage — venture capital now. I think the settings are good. But again, I’m sure it can be improved. But really, the industry is the one best able to identify that.

AS: You bring up venture capital. I was actually having a conversation with a venture capitalist a couple weeks ago, and he was saying one of the things startup founders need to think about when they’re addressing a problem is, ‘Why me? Why do I have the right to solve this problem?’ What do you see as the particular industries where Australia can be the leader in saying, ‘We have the right to solve this problem’?

MT: Well no one’s got the right to solve any problem, so that’s the first thing. The question, with respect, is a false premise. No one’s got a right to do anything in this sector. Everyone’s got an opportunity, though. So, the bottom line is, if you feel you’ve got the solution to a problem or you feel you can create the answer to some question or other, then go for it. You don’t need a right or an entitlement, but you’ve got the opportunity.

Corporate branding: What it is and why you need it
Good corporate branding can add massive value to your business. We'll show you how to turn your brand into a valuable asset
7 MIN READ